Tree Rescue for the Sledding-Hill Woods 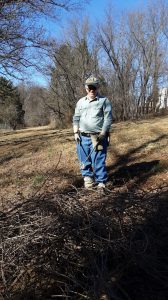 Ten Sligo Woods neighbors successfully rescued a number of trees along the south side of the sledding hill.  These threatened trees—mainly maples and tuliptrees—had been overgrown by porcelainberry, an invasive vine that climbs up the trunk and branches, and eventually weakens, smothers and kills even quite large trees.  The work was done on two Saturdays and two Sundays in early March—begun the 7th-8th and, by then carefully keeping social distances, the 15th-16th. Working in one, some, or all four of the afternoon sessions, Sligo Woods participants were from Tenbrook, Robin, Dennis, Kerwin, and Calumet, joined by a couple friends from beyond our neighborhood.

Along with the tree rescuing, there was also the satisfaction of bagging up trashy litter and separating out for recycling some unsightly stuff that’s been accumulating for years on the woodland floor, behind shrubs and out of easy reach. 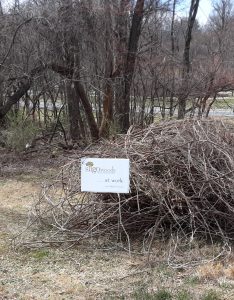 The work was done in an arrangement with Montgomery Parks, since the sledding hill and its bordering woodlands are part of Sligo Creek Park.  Parks staff provided their signature orange trash bags, the loan of some tools and provision of mud gloves, and the post-project pickup of the accumulated trash and an impressive pile of downed vines.  Though quite a heap, they were only a portion of all that had been removed, since much of the invasive material was left on the woodland floor to decompose back into soil, as is best for the health of a woodland ecosystem.  But as long, viney tangles impede the thoroughness (and sure-footedness) of the removal work, some were hauled out into the mown-grass area for removal by Montgomery Parks staff.

Stay tuned for announcement of the next round of tree rescue, expected next winter (the best season for such work), when trees on the opposite (north) side of the Sledding Hill will receive the energetic attention of the Sligo Woods Civic Association.

This entry was posted in Trash, Trees and tagged Neighborhood nature. Bookmark the permalink.